CERN is the European Organization for Nuclear Research. The name CERN is derived from the acronym for the French Conseil Européen pour la Recherche Nucléaire, a provisional body founded in 1952 with the mandate of establishing a world-class fundamental physics research organization in Europe.

Project Blue Beam is a conspiracy theory that claims that NASA is attempting to implement a New Age religion with the Antichrist at its head and start a New World Order, via a technologically-simulated Second Coming.

This is a guest speaking at a conference. Let us know what you think about the guest and said video. Thanks for stopping by BIN Paranormal! Stay tuned for more update to date posts on the high strange! Every now and then, our friends at CERN produce a strange article that seems to hide a cryptic message hidden behind it. Futureman19 attempts to decode this message.

CERN is the European Organization for Nuclear Research. The name CERN is derived from the acronym for the French Conseil Européen pour la Recherche Nucléaire, a provisional body founded in 1952 with the mandate of establishing a world-class fundamental physics research organization in Europe.

Emigrate While You Still Can! Learn More…

What do you think about these videos on CERN? Let us know in the comments section. Thanks for stopping by and stay tuned for more BIN Paranormal!

What on Earth does the Sistine Chapel have to do with NWO and Agenda 21? Check it out, this will blow your mind!

Did CERN have a hand in the recent devastating hurricanes? In-depth research from both of the following Youtubers that is STARTLING! A must see and share!

For an unprecedented analysis of CERN this is a MUST SEE!

You Better Watch This Video Before Sep 23rd 2017

In this analysis, Timothy Alberino breaks down the origin, activity and potential occult conspiracy behind the European Organization for Nuclear Research (a.k.a. CERN) and its Large Hadron Collider. The physicists and engineers working at CERN are ostensibly “probing the fundamental structure of the universe” in order to discover what it is made of, and how it all started. But is there a deeper and darker agenda percolating in occult shadows behind the scenes? Is someone trying to tear the veil of the material world and open a gate to a forbidden realm? One thing is for sure, mankind is about to step over a threshold that has not been trespassed for thousands of years. We may be getting ready to open a “pandora’s box” that was sealed long ago for our own protection. Although a great deal of information regarding CERN is covered in this presentation, it only manages to scratch the surface.

There is a vast amount of data relating to specific experiments occurring inside the Large Hadron Collider (each with its own potential ramifications) that had to be forgone in the interest of time. For more in-depth information on this subject, visit the CERN section of Steve Quayle’s website: http://www.stevequayle.com/index.php?… and the see the fantastic research of Anthony Patch: http://www.anthonypatch.com. Special thanks to Darrin Geisinger for helping me research this boundless and complicated subject. 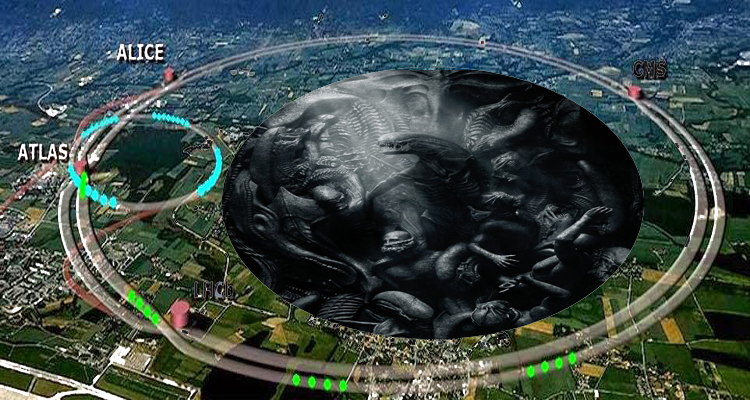 The absolutely terrifying prophecy of Revelation 9 has now been made known and explained with full disclosure! This report is intended for public awareness to help prepare your hearts for what is to come. This will happen SO FAST no one will be able to comprehend what is going on when it occurs – unless you were previously warned in advance.

This is the biggest reveal of end time prophecy ever documented – PAY CLOSE ATTENTION!

HOW WILL CERN BE USED TO OPEN THE PIT?

A rough demonstration on the principles behind CERN and the bottomless pit are presented in:

After starting the video, use the arrow ►| (located in the bottom left hand corner) to scroll through playlist series.

To view the complete Thy Kingdom Come (Art Show) from start to finish, please see: Supernatural Artwork Reveals ‘End Times’ Prophecy! The Most Jaw-Dropping Art Gallery You Will Ever Get To See! [Highly Recommended]

A very interesting characteristic of CERN is its relationship to Apollo (Apollyon) from Revelation 9:11. 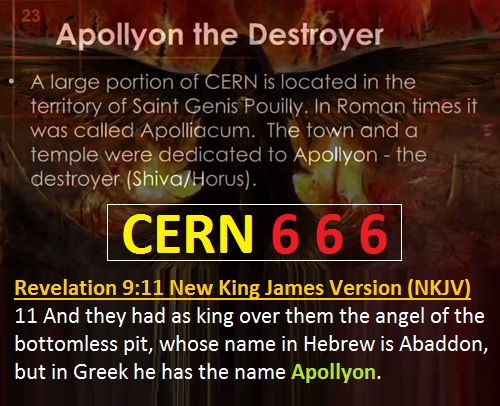 A large portion of CERN is located in the territory of Saint Genis Pouilly. In Roman times it was called Apolliacum. The town and a temple were dedicated to Apollyon (the destroyer)!

Apollyon is the king of the locusts of the bottomless pit!

WHAT IS IN THE BOTTOMLESS PIT?  THE LOCUST ARMY

These are not your typical ‘locusts’.. we now understand what Revelation 9:1-11 was describing!

Alien Covenant includes a near identical representation of the type of creatures described in Revelation 9, that are imprisoned in the bottomless pit, about to birth unto the earth in the apocalyptic event of the Great & Terrible Day of the Lord!

They are supernatural Xenomorphs that emerge from the bottomless pit seeking to sting men with the tail of a scorpion inflicting agonizing pain upon him for 5 months! The movie itself is only supplemental to the prophetic information revealing the locusts of the bottomless pit – everything is fully detailed in this bombshell radio show presentation!

The Revelation ‘locusts of the bottomless pit’ have now been uncovered! This is not science fiction. This is reality. The greatest horror the world will ever see is about to unleash from beneath the Earth! (For even more in-depth, follow up information see: Creatures of the Bottomless Pit – the Real Alien Threat You Need to Be Aware Of!)

YOU ARE EXILES DVD (LATEST UPDATE)

The big secret about your identity that the world does not want you to know about. There is a very dark truth about Satanic ritualistic cannibalism and how it fuels the coming One-World-Government. There is a dark, supernatural army of Locust like creatures that will be released during the Tribulation. Satan has been building his personal army for generations… Lucifer’s Shadow Government operates in the dark corners on Earth, and infects all major spheres of influence.

“The god of this world hath blinded the minds of the unbelieving, that the light of the gospel of the glory of Christ, who is the image of God, should not dawn upon them.” 2 CORINTHIANS 4:4

“Having abolished in his flesh the enmity, even the law of commandments contained in ordinances; for to make in himself of twain one new man, so making peace; And that he might reconcile both unto God in one body by the cross, having slain the enmity thereby” EPHESIANS 2:15-16

“And if you call on him as Father who judges impartially according to each one’s deeds, conduct yourselves with fear throughout the time of your exile” 1 PETER 1:17

FEATURED DVD (Updated): You Are Exiles

“When we incarnate into this world we are stripped of our former memories. As part of the great mystery and fabric of creation we have remembrance that connects back to before the beginning, to the foundations of the world and universe when Yahweh/Yahushuah as part of self, held all in being. We have been with the Father and Son since before the institution of time. The reason our memories are swept from us is so that we enter as a clean slate for renewed chance at redemption and salvation. What we do in this lifetime as angels, imprisoned within the flesh, determines our eternal fates and what we do in the life hereafter. Those who are blessed to be counted among the most elect will, in fact, judge angels and sit as jurors in the councils of the Lord to convict and condemn the rebel and fallen angels intended to be as gods themselves, forging a path of self service and vain personal glory.

“Do ye not know that the saints shall judge the world? and if the world shall be judged by you, are ye unworthy to judge the smallest matters? Know ye not that we shall judge angels? how much more things that pertain to this life?” (1 Corinthians 6:2-3 KJV Holy Bible)

There are only two paths we can follow in life, one as a foot washer in service to one another or as tyrant king in service to self. One is the path of priesthood or the way of Abel, and the other of kingship and divine right to rule—or the way of Cain. Those who follow the Lord and adhere to His commandments become the priests, prophets, and apostles that are stood up by the Lord to serve the people. Those who are appointed by Satan to become kings, queens, rulers, presidents, and prime ministers in service of a New World Order are usually personas that serve his goal of world domination. These individuals believe in their divine right to rule over and decide the collective direction of the world. The fact that many of them gather yearly at Bohemian Grove to worship a 40- foot owl, in a mock ritual sacrifice of a human effigy, lets one know that something weird is still ongoing.” (excerpted from ‘Sons of God’ by Zen Garcia)